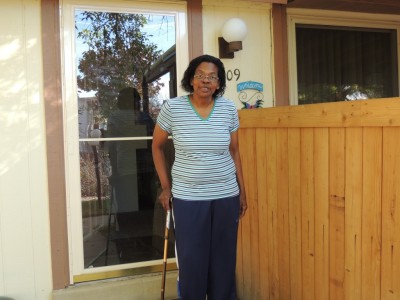 Debra Thompson outside her new home in Thornton, Colorado.

“Don’t tell me I can’t do it, I’ll find a way!” Debra says as she sits with cane in hand at her large dining room table complete with plastic cover and lace placemats. The table she waited a long time to get out of storage after living at the Savannah Suites hotel on Sheridan Boulevard for years before she was able to afford her new home. 55 year old Debra Thompson now lives in a spacious three bedroom home in Thornton with her two sons. To say that she’s had a hard life would be a complete understatement. Debra was born and raised in South Central Los Angeles she was one of four siblings. Her father was abusive who at one time broke three of her ribs. Her mother was the one who urged her to move out of the state which she eventually did but after that nothing ever came easy. Debra had ten children, mostly boys and three girls. A few years prior to working with NEWSED one of her sons was murdered in West Denver and around the same time she lost her house and became homeless. On top of that she couldn’t work at her long time security job because of a severe on the job injury and was living on disability. “Everything just happened at once, it all came down on me,” Debra recalls while staring down at her table.  “I made it through, but it was hard.”

Debra walks around her impeccably clean house which lingers with the smell of eggs she made herself for breakfast. She’s most proud of her large master suite. “Isn’t it big?” she beams with a big grin. In her living room there’s shelves she had her son put up that hold her limited edition McDonald’s glass collection and ceramic clown dolls. She has a lot to be proud of in this home she can finally be comfortable in, on her own terms.  She found NEWSED through a computer search while working with Mile High United Way’s IDA program. “I saw that there were other agencies but I had a feeling about NEWSED,” she recalled. When Debra and her son first entered NEWSED’s doors on June 3rd 2013 she had no FICO score and several collections. Her son’s collections were double hers with a score in the low 500s. NEWSED Housing Counselor, Mercedes Fuentes, knew that their case would be challenging and would take a long time to get them to the point of home ownership, but in August of 2015 they made it. Debra and her son did it together and now they join the ranks of hundreds of NEWSED success stories. Don’t ever tell a strong and resourceful woman like Debra Thompson that something is impossible it’s not in their vocabulary. As she walks out on her front porch to have her picture taken she takes in a deep breath of cool Colorado fall air and tells us to, “hurry up, it’s getting cold!” Debra is the reason why NEWSED works to build self-sufficiency for people who are considered beyond help. It is her lead that we follow.